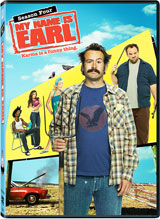 20th Century Fox Home Entertainment has included My Name Is Earl: Season 4 on their release schedule, bringing the TV series to DVD and Blu-Ray Disc in September.

“Karma” should be a four-letter word.  Just ask Earl, the lovable loser with a hilarious laundry list of dirty deeds that need undoing, from stealing a children’s bookmobile to getting his babysitter pregnant—the hard way!  And, while Earl’s brother Randy starts a karmic list of his own, his ex-wife, Joy, and her new husband are movin’ on up to the suburbs. Trouble is, you can take the girl out of the trailer park, but you can’t take the trailer park out of the girl. Hilariously irreverent and outrageously over-the-top, “My Name is Earl” Season Four proves, once again, that karma is a funny thing.

The DVD version will arrive on four discs, featuring an anamorphic widescreen transfer of the show with Dolby Digital 5.1 audio. As extras, the release will include Deleted Scenes and a Gag Reel, as well as the Featurette ”Earl’s Fan Mail”.

The Blu-Ray version will also come on four discs, featuring a 1080p high definition transfer of the show, complemented by DTS 5.1 HD Master audio. The same bonus materials as found on the DVD will be found on this release, however, presented in high definition this time around.