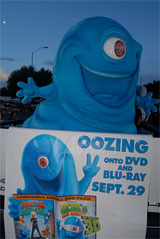 The title was announced during a special appearance of one of the movie’s monsters at alien hotspot Roswell with very little details except that the release will include an additional short film entitlted B.O.B.’s Big Break.

The discs both arrive on September 29th.