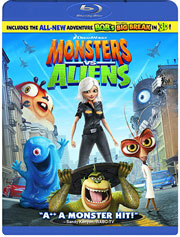 As we announced yesterday, the Dreamworks animated movie Monsters vs. Aliens will arrive on home video in September, and today we have the full details of the DVD and Blu-Ray versions for you.

When Susan Murphy (Reese Witherspoon) is unexpectedly clobbered by a meteor full of outer space gunk, she mysteriously grows to 49-feet-11-inches tall and is instantly labeled a “Monster” named Ginormica.  The military jumps into action, and she is captured by General W.R. Monger (Kiefer Sutherland) and held in a secret government compound filled with other “monsters” like herself. This ragtag group consists of the brilliant but insect-headed Dr. Cockroach P.H.D. (Hugh Laurie); the macho half-ape-half-fish The Missing Link (Will Arnett); the gelatinous and indestructible B.O.B. (Seth Rogen); and the 350-foot grub called Insectosaurus.  Their confinement time is cut short however, when a mysterious alien robot lands on Earth and the motley crew of Monsters is called into action to save the world from imminent destruction.

The DVD version will arrive as a 2-disc set, containing the movie in anamorphic widescreen with Dolby Digital audio. The release will be loaded with extras, such as the Featurette ”Modern Monster Movie Making” and a Commentary Track by the filmmakers. Also included are Deleted Scenes and a Music Video Jukebox. Further you will find the Featurette ”The Tech of Monsters vs. Aliens” on the disc and a series of Sneak Peeks giving you a first look at upcoming Dreamworks movies.

The second disc of the set will feature the new short film B.O.B.’s Big Break in Monster 3D & 2D, as well as another set of bonus materials, such as Karaoke Music Party, Paddle Ball Game in Monster 3D and some DVD-Rom FEatures.

A single-disc DVD version will also appear on store shelves, contain in the movie with a few of the above-mentioned extras.

The Blu-Ray version will be presented in 1080p high definition with Dolby Digital 5.1 TrueHD audio. It will include all the bonus materials form the 2-disc DVD version as well as a Trivia Track and a Picture-in-picture Video Commentary.

The biggest question is, of course, why this release will not contain a 3D version of the film – note that the short film included will do so. I think it would have been nice to have the 2D and 3D presentation of the film available, at the very least on Blu-Ray, but somehow Dreamworks is dropping the ball in that department much to everyone’s dismay. Nonetheless, “Monsters vs. Aliens” will be in stores on September 29.