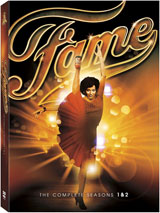 With a new and updated “Fame” movie coming to theaters this fall, MGM Home Entertainment is also preparing the 1983 TV series Fame: Season One & Two for release on DVD.

Known for its outstanding choreography and popular original songs, the critically acclaimed 1980’s hit earned rave reviews and garnered multiple awards, including a Golden Globe® for best TV series comedy/musical in 1983 and again in 1984, instantly establishing a dedicated fan base across the world. Based on the beloved motion picture with the same name, “Fame” brings drama, music and dance to life; Emmy®-award winning choreographer Debbie Allen stars as Lydia Grant, a faculty member who guides the gifted students through discouragement and disappointment as they struggle for a spot in the cutthroat entertainment industry.  Ultimately, they learn that although there are many set backs on the treacherous road to stardom, they must follow their dreams to achieve fame.

Arriving as a 9-disc DVD set, the release will include all 38 episodes from the show’s first and second season in their original fullframe aspect ratio, complemented by Dolby Digital mono audio tracks. The release will also include the Featurette ”Fame: Then and Now”.