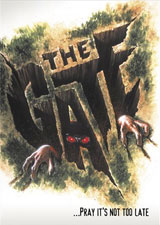 Lionsgate Home Entertainment has added a new DVD version of 80’s horror flick The Gate to their fall release line-up, offering it up as a Monstrous Special Edition in October.

They are here and they want to meet the neighbors. After an old tree is removed from the ground, three teenagers come across a special rock with a beautiful crystalline center in their backyard. The rock enthralls them and they dig up the family’s lawn in a search for more of the precious stones.  However, instead of stones, they find the Gate: a hidden underground chamber that holds the secret of centuries and the vengeance of eternity. Their actions inadvertently liberate a horde of nasty, pint-sized demons from the hole and what follows is a classic battle between good and evil as the three kids struggle to overcome a nightmarish hell that is literally taking over the Earth.

The DVD will feature an anamorphic widescreen transfer of the film, complete with Dolby Digital 5.1 audio. The release will in clude a Commentary Track by director Tibor Takács as well as Interviews with cast and crew members. Further you will find a Photo Gallery on the disc and the movie’s Theatrical Trailer.

“The Gate: Monstrous Special Edition” will arrive in stores on October 6 for $19.98. Sadly, no Blu-Ray Disc version of the title has been announced.