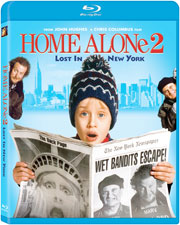 20th Century Fox Home Entertainment has also added the family comedy Home Alone 2: Lost in New York to their Blu-Ray line up, making sure you can enjoy Kevin’s antics in their full glory in October.

Kevin McCallister (Macaulay Culkin) is back! But this time he’s in New York City with enough cash and credit cards to turn the Big Apple into his own playground! But Kevin won’t be alone for long. The notorious Wet Bandits, Harry and Marv (Joe Pesci and Daniel Stern), still smarting from their last encounter with Kevin, are bound for New York too, plotting a huge holiday heist. Kevin’s ready to welcome them with a battery of booby traps the bumbling bandits will never forget!

“Home Alone 2” will feature a 1080p high definition transfer with DTS 5.1 HD Master Audio track. Sadly, Fox has not announced any bonus materials for this release, making us suspect that this might actually turn out to be a bare-bones release when it hits retail shelves on October 6 for $34.99.