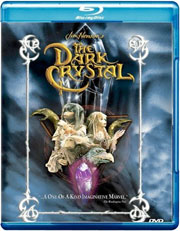 Sony Pictures Home Entertainment has just added the Jim Henson family classics The Dark Crystal and Labyrinth to their line-up, releasing these film on Blu-Ray Disc in September.

Enjoy incredible footage from the Henson archives in this 2-disc 25th Anniversary Edition of The DArk Crystal. Travel back in time to the faraway planet of Thra. Cheer on the Mystics as they fight to overthrow the evil Skeksis and take back control of their planet! When Jen, a member of the Gelfling tribe, sets out to find the crystal’s missing shard, his dangerous journey brings him face to face with monsters at every turn. Determined to restore peace to their planet, Jen will not back down! From the brilliant imagination of Jim Henson, this masterpiece of animation recounts the timeless tale of good vs. evil and has become a cult favorite of children and grown-ups alike!

Arriving in 1080p high definition with DTS 5.1 HD Master Audio, the release will include a Commentary Track with Brian Froud as well as a Storyboard Track. Further, The Book of Thra: Dark Crystal Collector will be included as well as SkekTek’s Crystal Challenge Trivia Game and a selection of Deleted Scenes. The release will also include Test Scenes regarding the Original Skeksis Language with an introduction by Screenwriter David Odell. In terms of Featurettes the release will contain ”The World of The Dark Crystal,“ “Light on the Path of Creation” and ”Shard of Illusion“.

In Labyrinth you have the chance to relive the magic in high definition also! This newly restored, 2-disc anniversary edition of Jim Henson’s “Labyrinth” contains an all-new commentary and bonus features that are guaranteed to captivate as never before. David Bowie and Jennifer Connelly invite you into a magical universe where nothing is what it seems! Babysitting infant stepbrother Toby on a weekend night isn’t young Sarah’s (Connelly) idea of fun. Frustrated by his crying, she secretly imagines the Goblins from her favorite book, “Labyrinth”, carrying Toby away. When her fantasy comes true, a distraught Sarah must enter a maze of illusion to bring Toby back from a kingdom inhabited by mystical creatures and governed by the wicked Goblin King (Bowie).

Also coming with a 1080p high definition transfer and DTS 5.1 HD Master Audio, the release will contain a Commentary Track by Brian Froud as well as the Making of Documentary ”Inside The Labyrinth”. Also included are the Featurettes ”Kingdom of Characters” and “The Quest for Goblin City”. The release will be rounded out by a Picture-in-picture Track called ”The Storytellers”.