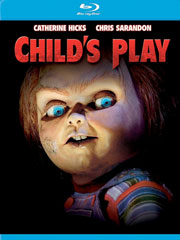 After 6-year-old Andy Barclay’s (Alex Vincent) babysitter is violently pushed out of a window to her death, nobody believes him when he says that “Chucky”, his new birthday doll, did it! Until things start going terribly wrong…dead wrong. And when an ensuing rampage of gruesome murders lead a detective (Chris Sarandon) back to the same toy, he discovers that the real terror has just begun…the deranged doll has plans to transfer his evil spirit into a living human being – young Andy!

Other bonus materials included on the release are a large series of Featurettes covering aspects such as ”Chucky’s Thoughts,” “The Advantages of Being Chucky,” “Chucky on Filmmaking,” “Up Close and Personal with Chucky,” “The Birth of Chucky,” “Creating the Horror,” “Unleashed – Chucky: Building a Nightmare,” “A Monster Convention,” “Chucky’s Back Bitches,” “Designer Toy” and ”Evil Comes in Little Packages”. Also included is the Vintage Featurette “Introducing Chucky: The Making of Child’s Play”.

Also included on the release is a DVD version of the movie without extras.