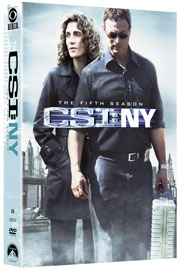 Paramount Home Entertainment included CSI: NY – The Fifth Season in their schedule, preparing the title for release in September.

“CSI: NY, ” the third incarnation of the “CSI: Crime Scene Investigation” franchise and the spin-off of “CSI: Miami, ” is a crime drama about forensic investigators who use high-tech science to follow the evidence and solve crimes in The Big Apple.

Arriving as a 7-disc DVD set, the release will feature the show in its original aspect ratio, complemented by Dolby Digital 5.1 audio. No extras have been announced for the release.