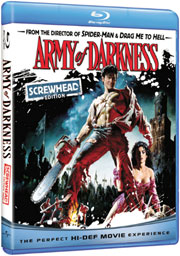 Universal Home Entertainment has announced the Screwhead Edition of Sam Raimi’s Army Of Darkness to be released on DVD and Blu-Ray Disc in September.

All primitive screwheads, listen up! Cult superstar Bruce Campbell (Evil Dead) reunites with director Sam Raimi to battle the deadly forces of evil in Army of Darkness – the outrageous, effects-fueled action epic that will make you scream with fear and laughter. Forced to lead a makeshift Dark Ages army against the demonic Deadites, who possess all the deadly magic of hell, the shotgun-toting, chainsaw-armed, reluctant 20th century time traveler Ash (Campbell) must save the living from the dead, rescue his medieval girlfriend and get back to his own time.

The DVD version will feature a new anamorphic widescreen transfer of the movie, complemented by a Dolby Digital 5.1 audio track. As extras you will find the Featurette ”Creating the Deadites” on the disc, as well as an Alternate Ending of the movie, and the movie’s Theatrical Trailer.

The Blu-Ray version dishes out a 1080p high definition transfer of the movie with a DTS 5.1 HD Master audio track. The disc will contain the same bonus materials as the DVD version but will in addition, contain U-Control Production Photos and BD Live features.