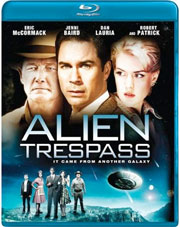 Alien Trespass is a wonderful throwback to the classic 50s science fiction films many of us love and cherish. The film will be available on DVD and Blu-Ray Disc in August.

Set in 1957, “Alien Trespass” chronicles the tale of a fiery object from outer space that suddenly comes crashing into a mountain top in the California Mojave Desert, bringing the threat of disaster to Earth. Out of the flying saucer escapes a murderous extra-terrestrial creature – the Ghota, which is bent on destroying all life forms on the planet. Urp, a benevolent alien from the spaceship, is the only one who knows how to stop the monster, but to do so he must inhabit the human body of Dr. Ted Lewis (Eric McCormack) – a noted local astronomer – and with the help of Tammy (Jenni Baird), a waitress from the local diner, begins a race against time to neutralize the Ghota before it consumes all the local inhabitants and uses the human fuel to multiply and conquer the world!

Both release will also contain the Featurette ”Watch the Skies“ as well as an Interview Featurette called ”Meet the Person” with Edwin R. Burroughs. A Breaking News Report and a Live News Update will also be included, as well as Interviews with R.W. Goodwin and Eric McCormack.

Look also for the movie’s Theatrical Trailers and a selection of Deleted Scenes.

“Alien Trespass” is really a little gem that deserves to be seen, so mark August 11 in your calendars when the film arrives for $27.95 on DVD and $35.98 on Blu-Ray Disc.