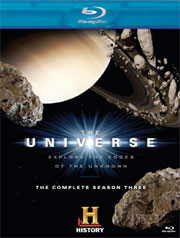 A&E Home Entertainment is bringing The Universe: The Complete Season Three to Blu-Ray this fall as we have just learned.

It is one of the most fascinating TV series on the History Channel but also one that can easily go over your head and get your mind spinning – “The Universe.” If you haven’t discovered this science show yet, you owe it to yourself to give it a try some time! Take an exhilarating ride across the galaxy! Shot in HD with stunning footage from NASA and state-of-the-art CGI graphics, this series brings the beauty and mysteries of the cosmos home to viewers with this Season 3 release.

Presented in glorious 1080p high definition with lossless PCM stereo audio, “The Universe: The Complete Season Three” will arrive on stores on September 29 for $69.95.