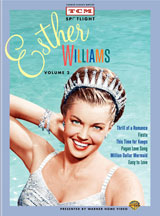 To fans of classic movies, Esther Williams is best known as the beauty who spent most of her onscreen time in pools and under water, showcasing the grace and beauty of swimming. Now Warner Home Video is bringing six of her films to DVD in the Esther Williams Collection: Volume 2, slated for October.

In Thrill Of A Romance there’s a man overboard! War hero Van Johnson takes one look at Esther Williams and decides he needs swimming lessons.

The movie will include the Vintage Shorts ”Inflation” with Esther Williams’ first screen appearance, and the Passing Parade entry ”The Great American Mug.”. Also included is the Classic Cartoon ”Wild and Woolfy” as well as 4 Outtake Musical Sequences, ”Gypsy Mattinata, I Should Care, Please Don’t Say No” and ”Vesti La Guibba”. The disc will be rounded out by the movie’s Theatrical Trailer.

Also included on this disc is the Vintage Passing Parade Short ”Goodbye, Miss Turlock” and the Classic Cartoon ”Hound Hunters” as well as the Theatrical Trailer.

The set also includes This Time For Keeps in which an ex-GI falls for a bathing beauty (guess who!). Lauritz Melchior, Xavier Cugat, Jimmy Durante and Mackinac Island locations add to the good times and romance.

The Vintage Pete Smith Specialty Short ”Curious Contests Star-Studded Off-the-Set Glimpse of Screen Actors”, the Classic Cartoon ” The Chump Champ” and 3 Outtake Musical Sequences will be also be included on this discs, as well as the movie’s Theatrical Trailer.

Tonight in the Hippodrome Tank: the Million Dollar Mermaid, Annette Kellerman, Goddess of the Sea! Esther portrays Kellerman in a splashy biopic that includes a must-see Busby Berkeley extravaganza.

This film will be supplemented by the Featurette ”The Hoaxters” and the Classic Cartoon ”The Wise Little Quacker” and the movie’s Theatrical Trailer.

In Easy To Love, Esther wins fans at the Cypress Gardens’ aquashow, but will she ever win the heart of her all-business boss Van Johnson? Busby Berkeley guides the legendary water-ski number.

This disc will come with a Vintage FitzPatrick Traveltalk Short ”Romantic Riviera”, the Classic Cartoon ”Cobs and Robbers” and the film’s Theatrical Trailer.