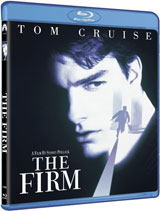 Paramount Home Entertainment has scheduled the taught thriller The Firm for release on Blu-Ray Disc this September.

Tom Cruise plays Mitch McDeere, a brilliant and ambitious Harvard Law grad. Driven by a fierce desire to bury his working-class past, Mitch joins a small, prosperous Memphis firm that affords Mitch and his wife (Jeanne Tripplehorn) an affluent lifestyle beyond their wildest dreams. But when FBI agents confront him with evidence of corruption and murder within the firm, Mitch sets out to find the truth in a deadly crossfire between the FBI, the Mob, and a force that will stop at nothing to protect its interest — The Firm.

The release will feature a 1080p high definition transfer of the movie and supplement it with a Dolby Digital 5.1 TrueHD lossless audio track. As extras the release will include the movie’s Theatrical Trailers.