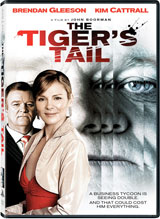 MGM Home Entertainment has included John Boorman’s The Tiger’s Tail in their release line-up, bringing the film to DVD in August also.

In a society divided by “haves” and “have nots, ” wealthy Irish capitalist Liam O’Leary (Brendan Gleeson) has it all.  But now, Liam is being stalked by a menacing look-alike, intent on stealing away everything he has: his job, his wife (Sex and the City’s Kim Cattrall), and his sanity. As his perfect world comes crashing down, Liam must fight to stay alive and uncover the shocking secret of his shadowy past before it destroys him.

The DVD will arrive in an anamorphic widescreen transfer, complemented by a Dolby Digital 5.1 audio track. Sadly no extras will be included in the release according to the information that we have received..