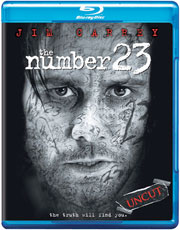 Warner Home Video has also added a Blu-Ray Disc version of the Jim Carrey film The Number 23 to their line-up, scheduling the release of the disc for early October.

Ever notice how phenomena and events tie to the number 23? Walter Sparrow has: 2012 (20+1+2), the end of the Mayan calendar; 23 pairs of chromosomes in the human body; February 3 (2/3), Walter’s birthday. Here, there, everywhere, Walter sees connections and it may be driving him to madness and murder. Jim Carrey puts aside his comedy persona to portray haunted, desperate Walter in an immersive psychological thriller guided by Joel Schumacher.

The release will contain a large number of bonus materials, such as the Theatrical Version Fast Track, which will allow you to explore the numerological world of the movie, the cast and the creative team with enjoyment-enhancing Pop-Up Factoids and video segments as you watch.

Also included ar Deleted Scenes and an Alternate Opening and Ending. A Commentary Track by director Joel Schumacher is also included, together with the Featurettes ”Creating the World of Fingerling,” “How to Do Your Numbers,” “The Making of The Number 23” and ”The 23 Enigma”.

Also included on the release are Trailers as well as Additional Footage regarding “Scene 44” with optional commentary by director David Cronenberg, as well as footage of The Unmaking of Scene 44, a featurette detailing the creation of Scene 44.