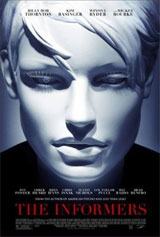 Sony Pictures Home Entertainment has slated the acclaimed film The Informers for release on DVD and Blu-Ray Disc in August.

In his bestselling novels (American Psycho, Less Than Zero), author Bret Easton Ellis established himself as a modern chronicler of decadence, and a writer who reveals the dark shadows behind lives of wealth and glamour. In this new film, Ellis co-writes a script inspired by his own stories. Billy Bob Thornton and Kim Basinger, Winona Ryder and Mickey Rourke star in an interweaving tale, which unfolds in Los Angeles in the decadent 80’s: a city ruled by addictions of every type – from sex, to drugs, to power – where youth is wasted, where love is fleeting, where every night is a headlong rush to the next orgy of sensation. Sooner or later, the party has to end …and the hangover is bound to be a killer.

The DVD version features an anamorphic widescreen transfer of the film with Dolby Digital 5.1 audio. As extras the disc will contain a Commentary Track by the director and cast members. Also included is the Featurette ”Human Intersections: Making The Informers”.