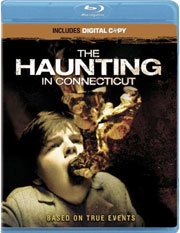 Lionsgate Home Entertainment has included the horror thriller The Haunting In Connecticut to their release line-up, scheduling the film for release on DVD and Blu-Ray Disc in July.

Based on a chilling true story, “The Haunting In Connecticut” charts one family’s terrifying, real-life encounter with the dark forces of the supernatural. When the Campbell family moves to upstate Connecticut, they soon learn that their charming Victorian home has a disturbing history: not only was the house a transformed funeral parlor where inconceivable acts occurred, but the owner’s clairvoyant son Jonah served as a demonic messenger, providing a gateway for spiritual entities to cross over. Now, unspeakable terror awaits when Jonah, the boy who communicated with the dead, returns to unleash a new kind of horror on the innocent and unsuspecting family.

The film will appear in two DVD versions. The first one will feature the movie’s Theatrical Cut, while the second one will offer up an Unrated Cut of the film. Presented in anamorphic widescreen with Dolby Digital 5.1 audio tracks, the release will also contain Two Audio Commentaries, featuring the director, producer as well as cast and crew members. Also included are the Featurettes ”Two Dead Boys,” “The Fear Is Real,” “Anatomy Of A Haunting” and “Memento Mori: The history of post-mortem photography”

The Blu-Ray version will feature a 1080p high definition transfer supplemented by a DTS 5.1 HD Master Audio track. The release will feature the same extras as the DVD version, but will also include a Digital Copy.