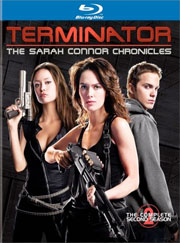 Warner Home Video this morning sent over information about the upcoming release of  Terminator: The Sarah Connor Chronicles: The Complete Second Season, slated for release in September.

The time: today. The stakes: all our tomorrows. A nascent AI, assisted by droids, continues to edge toward world domination and the ruin of humankind. It accepts no limits. It fears no one. Except John Connor. The machines know John, now 16, is the future head of the resistance. They know he is growing in abilities. They must find and terminate him. But Sarah Connor is there, protecting and instructing her son as he becomes the man he’s destined to be.

The DVD set will feature anamorphic widescreen transfers of all 22 one-hour episodes with Dolby Digital 5.1 audio. In addition, the release will contain a number of bonus features, such as The Continuing Chronicles Featurettes, consisting of “Write The Future,” “Conceptualization,” “Blood And Metal,” “Designing Destruction,” “Choreographing Chaos,” “War Stories,” “Setting The Tempo” and “Motivations.” Also included are Terminated Scenes, a Gag Reel and Cameron vs. Rosie: Fight Rehearsal. The Storyboard Process: Cameron Goes Bad is also included as well as a Commentary Track with Lena Headey, Thomas Dekker, Summer Glau and Shirley Manson and Executive Producers Josh Friedman, James Middleton and John Wirth.

The Blu-Ray version will feature a 1080p high definition transfer and include all of the above bonus materials also. In addition however, this version will also come with Collision with the Future: Deconstructing the Hunter Killer Attack, an interactive exploration of the climactic Hunter Killer attack featured in the Season Two finale. Four simultaneous points of view show all elements of the filmmaking of Terminator: The Sarah Connor Chronicles from Production, Direction, Visual Effects, and Special Effects.  Additional focus points allow the viewer to explore even more elements of what it took to create this dramatic stunt sequence.

“Terminator: The Sarah Connor Chronicles: The Complete Second Season” arrives on September 22 for $59.98 on DVD and $79.98 on Blu-Ray Disc.