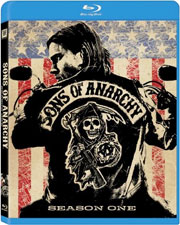 20th Century Fox Home Entertainment has included the First Season of Sons Of Anarchy to their line-up, bringing the FX Network show to DVD and Bul-Ray disc in August.

“Sons of Anarchy, ” is an adrenalized drama with darkly comedic undertones that explores a notorious outlaw motorcycle club’s (MC) desire to protect its livelihood while ensuring that their simple, sheltered town of Charming, California remains exactly that.  Charming.  The MC must confront threats from drug dealers, corporate developers and overzealous law officers.  Behind the MC’s familial lifestyle and legally thriving automotive shop is a ruthless and illegally thriving arms business.  The seduction of money, power, and blood.

The DVD version arrives in anamorphic widescreen with Dolby Digital 5.1 audio. Among the extras on this 4-disc DVD set you will find Commentary Tracks on selected episodes as well as Deleted Scenes as well as 5 Featurettes covering the production, the casting, the ink and the bike from the show among other things.

The Blu-Ray version will arrive on 3 discs, featuring all 13 episodes in 1080p high definition video with a lossless 5.1 audio track. The same extras will be included on this version as on the DVD version.