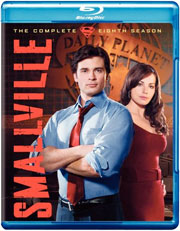 There’s a new reporter at the Daily Planet: Clark Kent, who shares a workspace with Lois Lane. There’s a new hero in Metropolis, too. No one knows who he is. But Jimmy Olsen was on the scene of one of the do-gooder’s exploits, and he snapped a blurred photo of the hero in superspeed action – a hero everyone now calls the Red-Blue Blur. Red-jacketed, blue-shirted Clark Kent draws closer to his Superman destiny in the exciting 22-episode Season 8 of Smallville.

The set includes all episodes along commentaries, unaired scenes, the featurettes Smallville’s Doomsday: The Making of a Monster and In the Director’s Chair: Behind the Lens and Calling the Shots with Allison Mack.