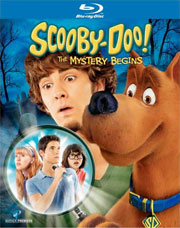 “Scooby-Doo! The Mystery Begins” uses adventurous storytelling and stylized visuals of both live-action and CGI technology to entertain fans of all ages. Scooby-Doo! The Mystery Begins follows the Mystery Inc. gang, a mismatched quartet of unlikely teenage pals, uniting for the first time to solve the haunting of their high school. Along the way, fans will discover the back story of Fred, Daphne, Velma, Shaggy and Scooby-Doo.

The live-action cast features Robbie Amell (Life With Derek, True Jackson) as Fred along with Kate Melton as Daphne, Hayley Kiyoko as Velma and Nick Palatas as Shaggy. Frank Welker, a member of the original “Scooby-Doo, Where Are You!” voice-cast, provides the voice of Scooby-Doo.

The new story follows the crime fighting gang in their first adventure together. The DVD and Blu-ray both contain a Coolsville Yearbook, in which the actors who play Fred, Velma, Daphne and Shaggy reveal even more of their character’s back-story including what they do in their spare time, their favorite foods, what they want to do when they grow up, and a secret time capsule message for the future that can be solved by finding clues hidden within the DVD enhanced content.

Also included is the “Velma, Daphne, Fred or Shaggy?” Personality Quiz where you can find out if you are you a brain, a drama queen, a jock or a loveable nerd? By navigating a series of questions, you can decide which member of the Mystery Inc. gang you are most like.
Further you’ll find a Music Video and a Gag Reel on the release.

The Blu-Ray version will also included a Character Pop Up Factoid Track in which Velma gives scientific and trivia factoids, Daphne gives stylish and dramatic interpretations, Fred flexes his muscles and Shaggy, well everything reminds Shaggy of food.
The disc arrives on September 22nd for $27.95 on DVD and $35.99 on Blu-Ray that also contains a Digital Copy.