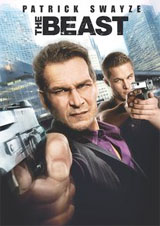 Sony Pictures Home Entertainment is putting the final touches to The Beast: Season 1 for release as a 3-disc DVD set this August.

Patrick Swayze is back and gunning for justice as Charles Barker, an unorthodox but effective FBI veteran in “The Beast.” Though considered by many, including rookie partner agent Ellis Dove (Travis Fimmel), to be the best in the business, FBI undercover operative Barker has a style that is nothing if not unconventional. In pushing Dove to immerse himself more deeply into the characters they create, Barker makes it clear how the stresses and dangers of working undercover make normal relationships impossible. As he and his mentor are tested by cases that pit them against ruthless drug lords, dangerous arms dealers, corrupt cops and deadly killers-for-hire, Dove also struggles with his own secret: he’s being asked to cooperate with an FBI investigation of Barker, who’s suspected of going rogue. And as Dove is pressured to become an informant, Barker launches his own investigation into a conspiracy within the Bureau that’s protecting a secret cadre of agents operating outside the law.