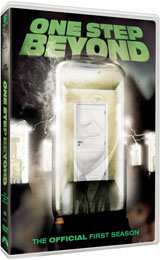 Paramount Home Entertainment has added One Step Beyond: The Official First Season to their DVD line-up, scheduling the release for September.

“One Step Beyond” was mainly filmed at M-G-M Studios, Hollywood, and partly at M-G-M British Studios, Borehamwood, Herts. It premiered nine months before The Twilight Zone, and was also known as Alcoa Presents: One Step Beyond. All episodes are directed by Newland himself, a dab hand whose trademark is subtle, balletic camera work. This series fed the nation’s growing interest in paranormal suspense in a different way. Rather than creating fictional stories with supernatural twists and turns, this program sought out “real” stories of the supernatural, including ghosts, disappearances, monsters, etc., and re-creating them for each episode. No solutions to these mysteries were ever found, and viewers could only scratch their heads and wonder, “what if it’s real?”

The release will feature 561 minutes worth of the show, including all of the show’s first season episodes, and supplement it with the original mono audio track. No extras will be included.

“One Step Beyond: The Official First Season” arrives in stores on September 15 for $49.99.