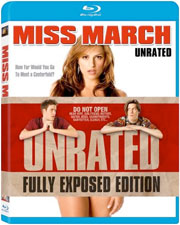 20th Century Fox Home Entertainment has decided to add Miss March to their DVD and Blu-Ray Disc line-up in July.

Expose yourself to the rudest, crudest, raunchiest comedy of the year with the unrated cut of Miss March – including super-sexy scenes and gross-out gags you couldn’t see in theaters!

Zach Cregger and Trevor Moore (co-founders of The Whitest Kids U Know comedy troupe) are in for the ride of their lives as Eugene and Tucker, two best friends who embark on a hilarious cross-country road trip to the legendary Playboy Mansion to find Cindi (Raquel Alessi), Eugene’s gorgeous virgin-turned-centerfold girlfriend!

The DVD version will feature an anamorphic widescreen transfer of the film with Dolby Digital 5.1 audio and additional footage not seen in theaters. Also included are Audition Videos and a Behind- the-Music Video with more babes and booty shaking.

The Blu-Ray version features a 1080p high definition transfer with a DTS 5.1 HD Master audio track and will contain the same bonus materials as the DVD version. In addition, the Bl-Ray version will also contain a Digital Copy of the movie.