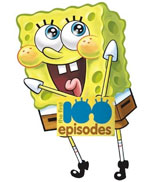 In fact I’ve got 100 reasons to celebrate Spongebob Squarepants. The first 100 episodes are being released by Paramount Home Entertainment in September.

The set contains all the episodes from the first five seasons of the series and also includes the featurettes Square Roots, Life Lessons from Bikini Bottom and Help Wanted along with a Music Video.

On September 22nd, the Sponge arrives in Spongebob Squarepants: The First 100 Episodes with a suggested retail price of $99.99. That’s ever so slightly less than $1 per episode.