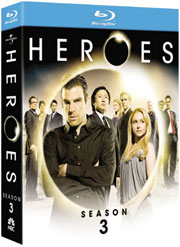 Universal Home Entertainment has revealed details about the upcoming release of Heroes: Season 3 on DVD and Blu-Ray Disc, scheduled for a September release.

Arriving as a 6-disc DVD set, the series will be presented in anamorphic widescreen with Dolby Digital 5.1 audio and will also contain a host of bonus materials, such as Deleted Scenes, and Alternate Stories. Also included are a number of Featurettes, such as ”The Superpowers of Heroes,” “Completing TheScene,” “The Prop Box,” “Genetics of a Scene,” “Exploring Claire’s Mind,” Speedster Steals the Formula”, “Throwing Thoughts,” “Lights, Camera, Beeman” and “The Writers’ Forum.” Also included are Audio Commentaries for the episodes and Tim Sale’s ,b>Gallery of Screen art.

The Blu-Ray version presented in 1080p with DTS 5.1 HD Master Audio track will include all these features, presented in high definition, as well Picture-in-picture Video Commentaries and more Alternate Stories. Further you will find a Heroes Connections on the release as well as the Featurette ”Building Coyote Sands”, revealing the complete building and shooting of the Coyote Sands Internment camp featured in Episode 321 “1961.” Coverage includes: building of the on-location set in the rain and the shooting of scenes with actors and crew.

The release will be rounded out by BD Live connectivity and a Season 4 Sneak Peek.