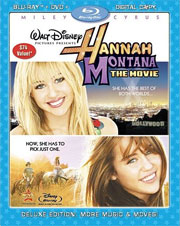 Walt Disney Home Entertainment has just unveiled details about the upcoming release of Hannah Montana: The Movie, scheduled to make it to DVD and Blu-Ray Disc n August.

Get ready to be dazzled by Disney’s big-screen smash hit – Hannah Montana: The Movie – filled with laughs, adventure, family fun and fabulous music! Come along for the ride and see Hannah like never before as she returns to her roots and faces the most important decision of her life! When Miley Stewart (aka pop-star Hannah Montana) gets too caught up in the superstar celebrity lifestyle, her dad decides it’s time for a total change of scenery. But sweet niblets! Miley must trade in all the glitz and glamour of Hollywood for some ol’ blue jeans on the family farm in Tennessee, and question if she can be both Miley Stewart and Hannah Montana. With a little help from her friends – and awesome guest stars Taylor Swift, Rascal Flatts and Vanessa Williams – will she figure out whether to choose Hannah or Miley? Hannah Montana: The Movie is a heartfelt major motion picture perfect for the entire family.

Disney will prepare 2 DVD versions for the film. The first one is a single-disc DVD that will feature the movie itself without notable extras. The second version will be a 2-disc Deluxe Edition including a Commentary Track by director Peter Chelsom, as well as a selection of Deleted Scenes and Bloopers. Also included are a number of Featurettes taking you behind the scenes to meet the cast, their home towns, as well as the movie’s production. The release will be rounded out by the Music Video “The Climb”, as well as a Digital Copy of the film.

The Blu-Ray version will contain the Blu-Ray version, the DVD version of the film as well as all the same extras as the Deluxe Edition DVD. In addition to those features it will also include Additional Music Videos as well as a How-to Dance to teach you the moves from the movie.