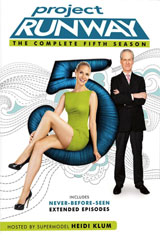 The Bravo TV series starring ex-supermodel Heidi Klum and self-proclaimed fashion expert Tim Gunn will dish out another series of episodes including celebrity judges as well as contestants who think they have what it takes to become the next supermodel. Yeah, right…

Arriving as a 4-disc DVD set in the show’s fullframe presentation with Dolby Stereo audio, the release will offer Never-before-seen Extended Episodes among its extras.

“Project Runway: The Complete Fifth Season” is coming to a store near you on August 4 for $27.95.