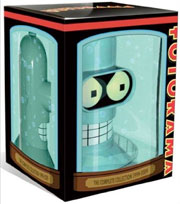 Two pieces of great news for fans of Futurama that somehow lead to less great news. But overall, it’s a good day for fans.
First is the release of the Complete Series on DVD including all seasons of the show and the four direct to video movies. The new set will not contain any new extras, but will contain everything in one pretty sweet looking Bender head. The last two films will be on DVD though, not Blu-ray.

And the second piece of good news is that Fox has officially ordered a new season of the series to begin next year on Cartoon Network, and possibly Fox.

Well great news. Wait a second. That makes the new box set instantly obsolete. Oh well. Some day will get a new box set with all the new episodes and a few Blu-rays. In the mean time, if you want to catch up on Futurama before the new episodes begin, the box set is the cheapest way to do it (and the most stylish).

The set will premiere at Comic Con this year.