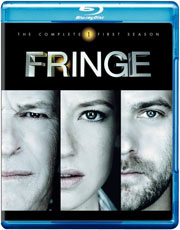 Warner Home Video has just added DVD and Blu-Ray Disc sets for Fringe: The Complete First Season to their line-up, scheduling the release for September.

Teleportation. Mind control. Invisibility. Astral projection. Mutation. Reanimation. Phenomena that exist on the Fringe of science unleash their strange powers in this thrilling series, co-created by J.J. Abrams (Lost, Alias), combining the grit of the police procedural with the excitement of the unknown. The story revolves around three unlikely colleagues – a beautiful young FBI agent, a brilliant scientist who’s spent the last 17 years in a mental institution and the scientist’s sardonic son – who investigate a series of bizarre deaths and disasters known as “the pattern.” Someone is using our world as an experimental lab. And all clues lead to Massive Dynamic, a shadowy global corporation that may be more powerful than any nation.

Arriving as a 7-disc DVD set, the show will be presented in its anamorphic widescreen presentation with Dolby Digital 5.1 audio. The release will also be packed with bonus materials, such as the Featurette ”Evolution: The Genesis of Fringe” in which the creators of the show discuss how the series unfolded and the qualities that make it so unique. ”Behind the Real Science of Fringe” is another Featurette on the release, discussing how the show incorporates recent discoveries in science. Consulting experts and scientists who are the authorities in their field address the areas of science which are the inspiration for the show.

Next up is ”A Massive Undertaking: The Making of Fringe”, an in-depth exploration of how select episodes came to be made: from the frozen far reaches of shooting the pilot in Toronto, to the weekly challenges of bringing episodes to air. ”The Casting of Fringe” is a Featurette that gives us the story, as told by producers and cast, of how Anna Torv, Joshua Jackson, John Noble and others came to be cast in the series.

Then there is the Fringe Visual Effects Featurette that goes deep into the creation of the shared dream state with some of the biggest VFX shots of the show, and a selection of Unaired Scenes as well as a Gag Reel and Fringe: Deciphering the Scene.. Also included is the Roberto Orci Production Diary and the Gene the Cow Montage.

The Blu-Ray version, arriving as a 5-disc set will offer up all the same extras as the DVD version, but in addition, come with an Expert Commentary on selected scenes, called ”Pattern Analysis”. Further the release will be BD-Live enabled with Exclusive Commentary by JJ Abrams.