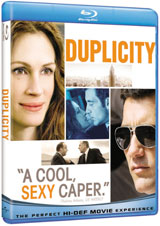 Universal Home Entertainment has added the caper Duplicity to their release line-up, scheduling the film for an August release on DVD and Blu-Ray Disc.

Oscar winner Julia Roberts and Clive Owen star as two sexy spies-turned-corporate operatives in the midst of a clandestine love affair. When they find themselves on either side of an all-out corporate war, they’ll put everything on the line to remain one double-cross ahead in a high-stakes game of cat-and-mouse.

The DVD version will feature a widescreen transfer of the the film with DTS 5.1 audio. The only extra on the release will be a Commentary Track by Writer and Director Tony Gilroy and Editor and Co-Producer John Gilroy.

The Blu-Ray version will present the movie in 1080p high definition supplemented by a DTS 5.1 HD Master Audio track. It will also include the Commentary Track by Writer and Director Tony Gilroy and Editor and Co-Producer John Gilroy, but will also contain a BD Live feature for access to additional online content.