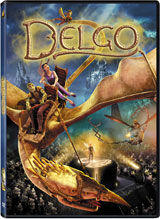 The land of Jhamora is torn apart by the mutual prejudice of two peoples – the winged Nohrin, masters of the skies, and the terrestrial Lockni, who harness the mystical powers of the land. When Delgo (Prinze Jr.), a reckless Lockni teenager, forms a forbidden friendship with the spunky Nohrin Princess Kyla (Hewitt), hostilities between the two peoples escalate, setting the stage for an exiled Empress (Bancroft) to exact her revenge and reclaim her rule.

The release will feature an anamorphic widescreen transfer of the movie with Dolby Digital 5.1 audio. As extras you will find a Commentary Track on the disc, as well as 14-minutes worth of Deleted Scenes. The Animated Short ”Chroma Chameleon” will also be included, together with four Featurettes giving you a closer look at the making of the movie.

“Delgo” will be in stores on August 4 for $22.98. A Blu-Ray version is also planned but no specs have been announced yet.