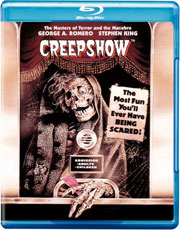 We just got information that Warner Home Video has added the horror anthology Creepshow to their Blu-Ray Disc line-up in September.

Two macabre masters – writer Stephen King and director George A. Romero – conjure up five shocking yarns, each a virtuoso exercise in the ghouls-and-gags style of classic ’50s horror comics. A murdered man emerges from the grave for Father’s Day cake. A meteor’s ooze makes everything … grow. A professor selects his wife as a snack for a crated creature. A scheming husband plants two lovers up to their necks in terror. A malevolent millionaire with an insect phobia becomes the prey of a cockroach army. Add the spirited performances of a fine cast (Hal Holbrook, Adrienne Barbeau, Leslie Nielsen, Ted Danson, E.G. Marshall and King himself) and the ghoulish makeup wizardry of Tom Savini. Let the Creepshow begin.

The movie will be presented in a 1080p high definition transfer in its original 1.85:1 widescreen aspect ratio and will feature a Dolby Digital 5.1 TrueHD audio track. Sadly, no extras other than the film’s Theatrical Trailer will be included in the release.

“Creepshow” has been scheduled for release on September 8 for $29.98.