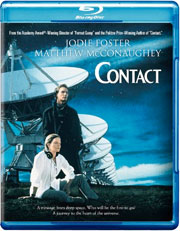 Warner Home Video has just added the 1997 science fiction film Contact, based on Carl Sagan’s novel, to their release schedule, bringing the film to Blu-Ray Disc in October.

The exciting adventure about the day we make contact with life beyond Earth comes to the screen with a profound sense of wonder and a dazzling visual sweep that extends to the outer reaches of space and the imagination. Jodie Foster is an astronomer, a woman of science. Matthew McConaughey is a religious scholar, a man of faith.

The release will contain Three Commentary Tracks, one with Jodie Foster, one with Robert Zemeckis and Steve Starkey and the third one featuring Ken Ralston and Stephen Rosenbaum.

Also included are Four Special Effects Featurettes as well as the movie’s Trailers.