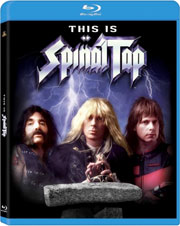 This is Spinal Tap has had many wonderful DVD releases and now comes to Blu-ray. 25 years after its original release, the film is coming from MGM.

In 1982 legendary British heavy metal band Spinal Tap attempt an American comeback tour accompanied by a fan who is also a film-maker. The resulting documentary, combined with powerful performances of Spinal Tap’s pivotal music and profound lyrics, candidly follows a rock group heading towards crisis, culminating in the infamous affair of the 18-inch-high Stonehenge stage prop surrounded by dancing midgets.

The two disc set will come with over an hour of deleted scenes, audio commentary by Spina Tap, the featurette Catching Up With Mary DiBergi, the Flower Perople press conference, music videos, am apearance on Joe Franklin, Spinal Tap selling out in commercials, a 2007 performance of Stonegenge at Live Earth, and the infamous National Geographic interview.