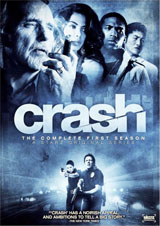 Anchor Bay Entertainment has scheduled Crash: The Complete First Season for release on DVD and Blu-Ray Disc in September.

In modern day Los Angeles — whether you’re rich or poor — everyone is just trying to survive without colliding into each other. But is it possible?

the DVD version of the release will feature widescreen version of the episodes with Dolby Digital 5.1 audio. As extras the DVD set will also contain a Behind The Scenes Featurette, an Alternate Ending for episode 13, Character Bios and a Season 2 Promo.

The Blu-Ray version, featuring a 1080p high def transfer of the show with Dolby Digital 5.1 audio also, will contain all the supplements from the DVD version but will in addition come with a Character Track bonus feature that will allow you to pick from selected characters and watch that particular story arc exclusively.
“Crash” will hit retail stores on September 15 for $59.97 on DVD and $79.97 on Blu-Ray.