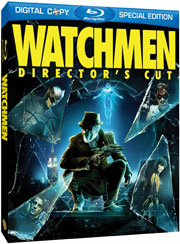 Warner Home Video has just unveiled first details about the upcoming release of the superhero blockbuster movie Watchmen to arrive on DVD and Blu-Ray Disc in July.

Someone’s killing our super heroes. The year is 1985 and super heroes have banded together to respond to the murder of one of their own. They soon uncover a sinister plot that puts all of humanity in grave danger. The super heroes fight to stop the impending doom only to find themselves a target for annihilation. But, if our super heroes are gone, who will save us?

The film will arrive on two DVD versions, one featuring only the movie itself in a fullframe presentation, while the Special Edition will offer up a Director’s Cut of the movie in an anamorphic widescreen version with Dolby Digital 5.1 audio. As extras the 2-disc release will also contain the Featurette ”The Phenomenon: The Comic that Changed Comics” as well as Watchmen: Video Journals and the Desolation Row Music Video ”My Chemical Romance”. A Digital Copy of the film’s theatrical cut will also be part of the release.

The Blu-Ray version of the movie will arrive in 108p high definition with high definition audio and also offer up the Director’s Cut of the film. Extras of this release will include a Warner Bros. Maximum Movie Mode as well a Featurette called ”Watchmen: Focus Points” and BD Live connectivity. Also inlcuded is the Featurette ”The Phenomenon: The Comic that Changed Comics” from the DVD version as well as the Desolation Row Music Video ”My Chemical Romance”. In addition you will find Real Super Heroes, Real Vigilantes on the release as well as Mechanics: Technologies of a Fantastic World. A Digital Copy of the theatrical version of the film rounds out this release.

“Watchmen” will make it to home video on July 28 .