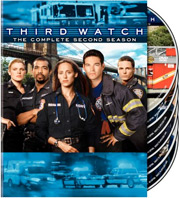 Warner Home Video has added Third Watch: The Complete Second Season to their release schedule, bringing the TV series to DVD in July.

Sometimes it seems as if the world is crashing in on itself. It’s the job of the first responders to hold it together. Police, firefighters, paramedics: The men and women of the 3-11 PM shift called third watch are ready to serve in situations ranging from small (attending to a frequent 9-1-1 dialer) to playful (a football match between fire departments) to harrowingly large and complex (tracking an elusive sniper who targets cops). The original team of heroes returns and an FDNY newcomer joins them in a 22-episode Season Two that combines the rigors of duty with compelling vignettes of life away from work. What kind of person defies a gun-wielding madman or rushes into a burning building? This kind – the people of Third Watch.

The 6-disc DVD set will contain all 22 episodes from the show’s second season, presented in their original fullframe aspect ratio with a Dolby Stereo audio track. As a bonus feature a Gag Reel from the show will be included.

“Third Watch: The Complete Second Season” will take on their duties on July 7 for $59.98.