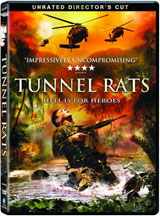 The year is 1967. American troops are making their way through the jungle of the Cu Chi District of Vietnam. A special US combat unit is sent out to hunt and kill the Viet Cong soldiers in a man-to-man combat in the endless tunnels underneath the jungle of Vietnam. “Tunnel Rats” is a stunning, no holds barred journey into the darkest chapter of the Vietnam War.

The film will be released as a Rated and an Unrated version with 4-minutes of additional footage inserted back into the film, sold on separate discs.

The release will contain an Interview with Director Uwe Boll, a selection of Deleted Scenes and a Behind-the-scenes Featurette.