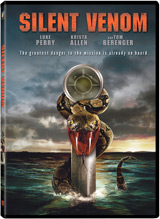 Tom Berenger, Luke Perry and Krista Allen face off against a slithering mass of lethal and aggressive snakes in this heart-stopping thrill ride set hundreds of feet below sea level.

Lieutenant Commander O’Neill’s (Luke Perry) orders were simple: Pilot a retired submarine to its final port and don’t get into trouble. But when he and his crew are diverted to rescue an imperiled Army research team, trouble is exactly what they find. “Running silent” in their unarmed sub to avoid detection by a hostile fleet, they bring the researchers and their top-secret cargo aboard. But when that cargo – including two genetically enhanced leviathans – escapes captivity, the crew find themselves battling deadly enemies above the surface and below foot in this fast-paced film filled with biting action and slithering suspense!

Fox will release the movie in an anamorphic widescreen transfer with Dolby Digital 5.1 audio. No extras have been announced at this time.