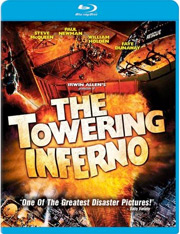 We just got information that 20th Century Fox Home Entertainment will be releasing the disaster flick The Towering Inferno on Blu-Ray Disc in July.

The release will offer up a 1080p high definition transfer, complete with a DTS 5.1 HD Master Lossless Audio track. Although no details have been announced yet, expect to see all the bonus materials form the 2-disc DVD Special Edition on this release also.

“The Towering Inferno” will put you on the edge of your seat in high definition on July 14 for $34.98.