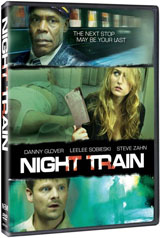 National Entertainment Media is releasing the film Night Train on DVD and Blu-Ray Disc this summer.

Onboard a night train, two passengers (Leelee Sobieski and Steve Zahn) and the conductor (Danny Glover) discover a corpse and a box of diamonds inside one of the cabins. At first, the three conspire to ditch the body and split the fortune – until greed and paranoia pits each of them against the others.

The release will contain a Making Of Featurette as well as Cast & Crew Interviews and a Photo Gallery. The disc will be rounded out by the movie’s Trailer.

“Night Train” will pull into your living room on July 7. Tickets go for as little as $24.98 on both DVD and Blu-Ray.