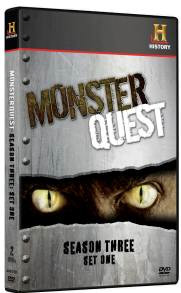 A&E Home Video has announced that Monster Quest: Season 3 Set 1 will come to DVD this summer.

Throughout history there have been countless sightings of mysterious creatures, from Megalodon, the father of the great white shark; to gators in the sewer, a result of the rising gator populations clashing with human encroachment; to the Snow Beast of the Colorado Rockies that is thought to be hunting the elk population while fleeing man.

Most of what we know of these creatures comes from campfire stories, blurry films and grainy photographs. In “Monster Quest” the History Channel brings science and technology to bear on these creatures of legend and seeks confirmation of their existence. Combining open-eyed historical research, state-of-the-art equipment and high-tech expeditions, each episode examines the best evidence available, from pictures and video, to hair and bones, to actual eyewitness accounts.

From pilots to policemen to ship captains, a number of seemingly credible people have seen things they can’t explain. One part history, one part science and one part monsters, “Monster Quest” discovers the truth in these sightings, and the legendary creatures behind them.