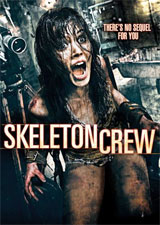 In latest news from Anchor Bay Entertainment , the studio has added the horror film Skeleton Crew to their release line-up, bringing the indie horror flick to DVD in July.

In the early 1970’s, a remote mental institution next to the Russian border was shut down by the police. Before it was closed, Dr. Andersson made a series of snuff films using his patients. The doctor filmed all the murders in 8mm, and started to call himself ‘The Auteur.’ Thirty years later, an American film crew arrives in Finland to shoot a horror movie about the massacre, and are unaware that they are about to become the stars of their director’s real life snuff film. Instead of making a horror film, they are in one. The Auteur is slaying the Skeleton Crew one by one…

The release will offer up an anamorphic widescreen transfer of the film with a Dolby Digital 5.1 audio track. At this time, no bonus materials have been announced.