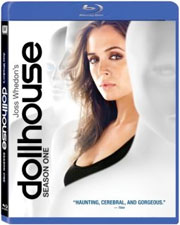 As an “Active,” the mysterious Echo (Dushku) serves as an unwitting agent of Dollhouse, an illegal underground organization that provides its elite clientele with programmable human beings. Actives receive personality imprints, allowing them to temporarily become anyone or anything—the perfect burglar, lover, spy, or assassin. Now, with the FBI and her own shadowy past closing in, Echo must face a rogue Active who will stop at nothing to bring Dollhouse down—forever.

The DVD version will offer up the show in an anamorphic widescreen transfer with Dolby Digital 5.1 audio.

The Blu-Ray Disc will be presented in a 1080p high definition transfer complemented by a DTS 5.1 HD Master audio track.