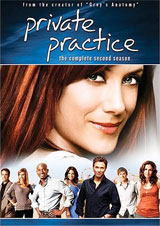 Private Practice is a spin off of the highly popular ABC series Grey’s Anatomy. Dr. Addison Forbes Montgomery, a renowned neonatal surgeon realizes that her life isn’t advancing at Seattle Grace and packs her bags and heads off to Santa Monica to start a new life. She reunites with her newly divorced med school friends and joins them in their chic private practice.

Coming as a 6-disc DVD set, the release will feature the show in its anamorphic widescreen format. As extras you will find a Commentary Track by series creator Shonda Rhimes on the release, a selection of Deleted and Extended Scenes, as well as a Blooper Reel. Further, an In-depth Look at Tony and Emmy Award winning cast member Audra McDonald is part of the release.

“Private Practice: The Complete Second Season” is on track for a September 15 release with a $59.99 sticker price.