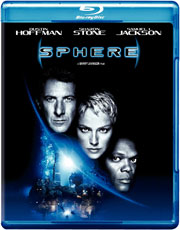 Warner Home Video has added a Blu-Ray Disc version of Sphere to their fall line-up.

Excitement runs deep when U.S. officials find and isolate a huge spacecraft that plunged into the Pacific – 300 years earlier. What is the craft’s origin? Can there still be living intelligence aboard? Dustin Hoffman, Sharon Stone and Samuel L. Jackson lead an underwater expedition to the mysterious object in this suspenseful adventure directed by Barry Levinson (Rain Man) and based on Michael Crichton’s novel. Step aboard for a new dimension in thrills – and prepare to come face to face with unnameable terror as near as your own thoughts!

The release, featuring a 1080p high definition transfer with high definition audio, will also offer a number of bonus materials, including a Commentary Track by Dustin Hoffman and Samuel L. Jackson. Also included is the Featurette ”Shaping the Sphere”, taking a look at the art of the Visual Effects Supervisor. The release will be rounded out by the movie’s Theatrical Trailer and TV Spots