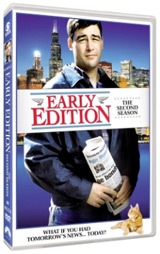 Paramount Home Entertainment has just added a Early Edition: The Second Season DVD box set to their July line-up, giving you over 16 hours worth of suspenseful drama over the summer.

This is an hour-long drama about Chicago native Gary Hobson who becomes a reluctant hero when his morning newspaper reports tomorrow’s headlines. Commodities trader Gary Hobson (Kyle Chandler) is losing it: his job, his home and his brilliant attorney wife. He thinks he may even be losing his mind when tomorrow’s newspaper mysteriously arrives today – giving him a disconcerting look into the future. What will he do with tomorrow’s news? While his best friend Chuck (Fisher Stevens) sees the newspaper as a ticket to personal gain, co-worker Marissa (Shanesia Davis) convinces Gary that the “early edition” should be used to better peoples’ lives. So each day Gary begins anew the struggle to make sense of a world turned upside-down by the changing course of events that come from reading the “early edition.”

The DVD will feature the original fullframe presentation of the TV show and supplement it with a Dolby Stereo audio track. Sadly, no bonus materials have been slated for this release.