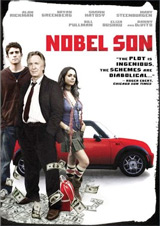 The DVD will feature an anamorphic widescreen transfer of the movie, complete with a Dolby Digital 5.1 audio track. As extras you will find a Commentary Track with director/producer Randall Miller, writer/producer Jody Savin, musician Paul Oakenfold, cinematographer Mike Ozier and actors Brian Greenberg and Eliza Dushku on the releases, as well as an Alternate Ending and a selection of 3 Deleted Scenes with optional commentary from director/producer Randall Miller and writer/producer Jody Savin.